As you can tell by the title of this post, I have a LOT to cover!

I am freaking out. My allergies are AWFUL and I have torn myself up everywhere.

The picture does it no justice. Those “pink” areas are actually RED. I have scabs EVERYWHERE (literally…everywhere…parts that should never have scabs). Mom has been slathering hydrocortisone cream made for dogs all over me. I HATE that cream. It smells like…like…stinky cream. I just don’t like it one bit AND it barely helps at all. I’m pretty much immune to Benadryl and Zyrtec, and Mom refuses to ever give me an allergy shot again because of the possible adverse effects. Not to mention the last one I got didn’t help at all.

Moving on to better things, there was lots of swimming at my house this weekend. A really cute little girl came over and used our pool.

“Hey! What are you doing in my pool, cute little girl? Are you okay? You’re splashing an awful lot! Do you need rescuing?”

I actually tried to jump in there with her! I was worried she was in trouble when she started splashing and I jumped as high as I could but my chunky little bottom wouldn’t get high enough off the ground to make it into the pool.

Looking back, I can’t believe I almost willingly went into water! *shudder*

Macy had her fill of swimming, too.

She kept trying to get in the pool so Mom gave her a boost and went swimming with her.

The reason Macy was allowed to swim? 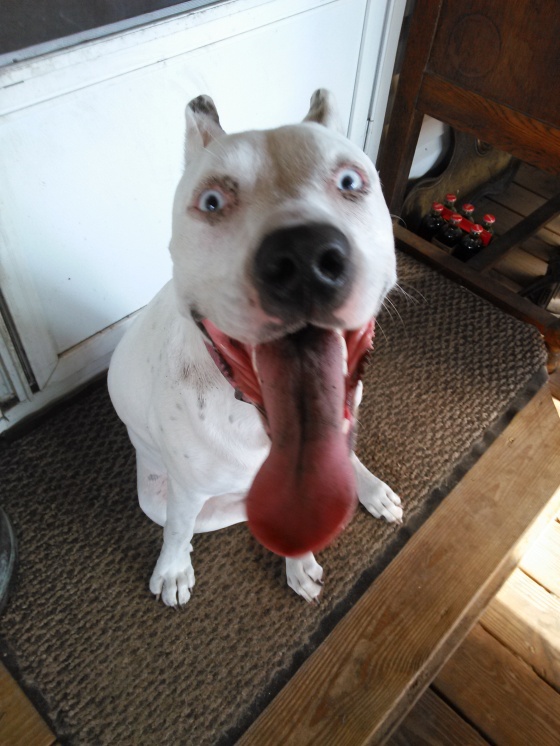 She came in looking like that earlier in the day! Her and Molly re-dug their tunnel to China. She was soooooooo dirty and mom would have been furious if she hadn’t looked so funny.

The easiest way to bathe Macy is to let her swim. So she did! While Macy was swimming, I was doing dirt wiggles. You know what happened next?

I got hosed off because I was so dirty!

Macy and I had to sit on the deck to dry off which I was miffed about but then I found a grease spot under the barbecue. Dad forgot to put a drip can underneath and, MAN, that grease was DE-LICIOUS!

“Haha, Macy! You’re too big to fit under hear. This grease is all MINE!”

Later in the evening, after we were all dry, we were allowed back out to do our business. Mom heard Macy and Molly going bonkers and went out to inspect. The girls had found a gopher tortoise burrow on the property (he must’ve moved in that day because he wasn’t there before) and Molly was digging him out! Now, although you’re not supposed to move gopher tortoises, Mom and Dad knew they had to or else he was as good as dead. So they took him to another burrow on the property that was mostly vacant.

Later in the evening, Mom heard commotion again. Would you believe he went back to the other burrow! I mean, I know it’s in their nature but this little guy (5-6 inches or so) has a death wish!

Mom got the girls in and about 5 minutes later, Molly jumped up on the couch. She was drooling EVERYWHERE! Molly isn’t a drooler. She was holding her jaw open all weird-like and Mom and Dad quickly inspected thinking she broke another tooth. Nope! Molly had a stick wedged horizontally between her upper molars. Dad couldn’t get it out and Mom freaked. Then Mom tried and somehow wiggled it out. 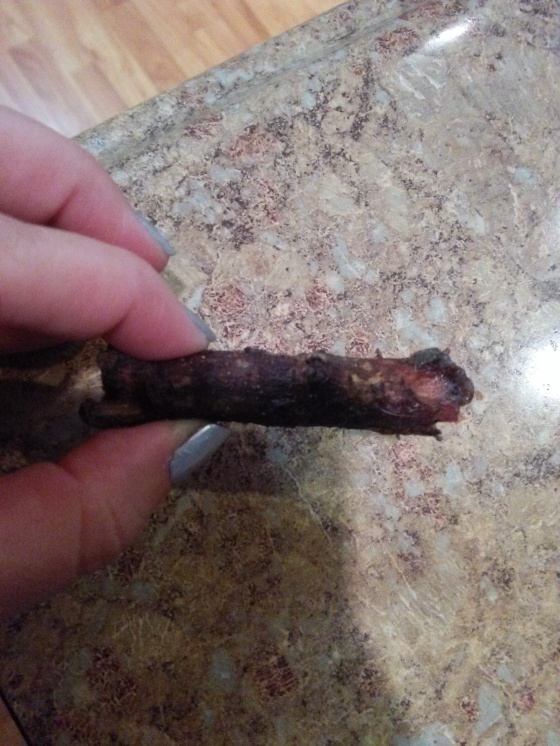 Poor Molly! She must’ve been in so much pain. When she first came inside, she went into her crate. Mom couldn’t believe that she waited so long to alert her and Dad that something was wrong.

The good news is, she’s fine and appears to be in no pain.

Whew! How’s that for an update?