My Story From the Beginning

Hi, everyone! My name is Noodle. My parents gave me a silly name to match my breed – a Schnoodle. I know what you’re thinking – “What the heck is a Schnoodle?!?” It is a Schnauzer/Poodle cross. I’m quite fancy!

You’re probably wondering what I did to deserve this awesome space of my own. It’s quite simple, really: I’m just me!

My story starts on Tuesday, January 10, 2012. That’s the date that my mom found me wandering the streets near her dad’s house (Hi, Grandpa!!!). She thought I was an old dog. My ribs were showing and my hair was really long, matted with poo, and I was covered in fleas. I even had some worms (that’s really embarrassing).

My mom was in quite a predicament – she was only visiting Grandpa while on her lunch break from work. Lucky for me my Grandpa is the best and he let me stay on his screened in porch while she finished out her day. When she got done with work (she left early), she found out from some of Grandpa’s neighbors that I had been living under a mobile home on his street for about 2 weeks. Then came something so super scary – Mom debated taking me to the….p-p-p-pound! Eesh! That word gives me goosebumps. Anyway, she was conflicted because she already had a dog – my best friend in the whole world, Khia -and a cat – my wannabe arch nemesis but deep down really good friend, Jamison. She was scared that I could get them sick. Plus she thought I still had an owner out there looking for me. Little did she know that I got dumped off. For this reason, I am still deathly afraid of going in the car.

Anywho, back to my journey to wonderfulness. Mom called my Dad and Dad (he’s a great guy), he told my Mom to just bring me home and they would figure things out.

Before Mom took me home, we made a stop at the greatest place – PetsMart grooming center. She called them on the way and told them we would be there in 30 minutes. When we got there, everyone felt so bad for me. They told Mom it was going to take awhile and that they’d call her when they were done. In the meantime, Mom went to go change out of her work clothes and pick up Dad. She was waiting and waiting and finally called the groomers to find out if I was done. Turns out, I had been done for 45 minutes but they were loving on me and playing with me. They said I was the greatest! They gave me my very first toy and made me a collar out of a harness that someone returned.

Next step: HOME! Mom and Dad took me to my HOME! It was a very scary transition. I had trouble sleeping. Mom tells me that I would fall asleep sitting up and as soon as I would drift off, I would jolt up and move somewhere else. I was scared of everything, including things that didn’t even move. 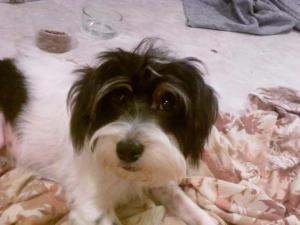 Mom and Dad took me to the vet and got me medicines and my vaccines. They found out I was only about 6 months old! That night I got the best surprise – I SLEPT IN A BED!!!! Well, more like I did the whole drift/jolt thing all night but you get the point.

Now, here we are almost 3 years later. I live the greatest life a dog can live and that’s why I wanted to write this blog. I want to share all my adventures with everyone! I hope you enjoy them as much as I do.