Hi, everybody! I am sorry I have been MIA but I have been EXHAUSTED! Mom took me on a ginormous adventure and I am actually still recovering.

On Saturday morning, she locked the girls up and grabbed my leash. Me? I’m going somewhere? Without dumb-dumb or Molly? Yippeeeee!

Well, once I got in the car. I decided I wasn’t happy about going somewhere. I cried, I yipped, I yapped, I shaked…I lost my mind. All 45 minutes of travel time! Yes, 45 minutes. Other than going to my Grandma’s I haven’t traveled for such a long ride in the car since the day I came to live with Mom and Dad.

So, where did we go?

To the place I came from! Grandpa’s neighborhood. I was SO excited when I got there. I jumped all over Grandpa. His neighbors even came out to see me because they hadn’t seen me since I was a stray and all cruddy looking. They told me how cute I was and pet me a lot.

Then we went inside. Do you know my Grandpa has 3 cats?! Well, after being picked on by Jamison and now Macy, I felt it would be fun to play around with Socks and Charlie (Sarah was hiding). Charlie immediately went up on the book case but Socks and I had an old west- style showdown. Mom says I pretended to be a big Rottweiler, not little ol’ me.

I was bossing Socks around, giving him the business, when all of a sudden he hissed and growled at me! Well, I wasn’t about to take that from him so I went bonkers. After that, I had to get separated from the cats. Oops!

We stayed at Grandpa’s for most of the late morning/early afternoon.

When we left, I was so good in the car, like I always am on the ride home. We were driving and I was just looking out the window when all of sudden, Mom turned off the main road. Hey, where are we going now???

I went to Petco for the first time ever! I’ve been to Petsmart a lot but never Petco. It was raining so we rain in the rain and I splashed through puddles. It was a blast!

Everyone in Petco pet me. They told me I looked so happy to be there. I was 🙂

After Mom got the bird food we went in for, we got to play in the rain again.

20 minutes later, we made it home. I was exhausted! Of course, Macy wanted to play. Macy ALWAYS wants to play.

Finally, she left me alone and I got some shut-eye. 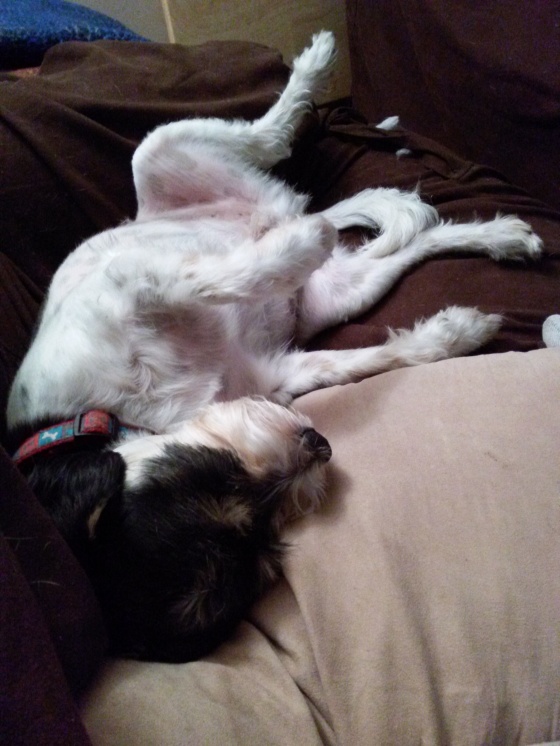 I was still exhausted yesterday and spent some time cuddling with Mom while Macy watched TV. 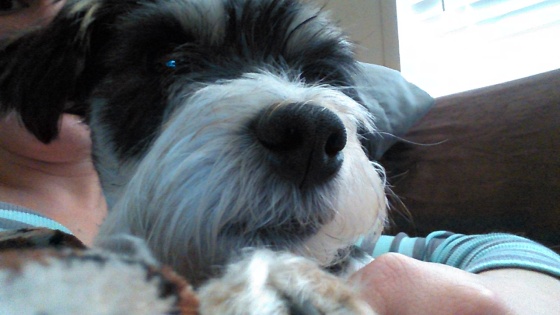 Mom was super excited for us to watch the Puppy Bowl but we were all sleepy. She ended up recording it to watch tonight.

While we were napping, Dad was busy making a new home for Franklin. She seems to have been quite upset for the last 2 months. Every time we go outside she screams on the top of her lungs. Mom isn’t sure if she misses being with other ducks or if it’s because she can’t have unlimited access to a swimming pond while living with the chickens. So, Dad fixed up the old Guinea Hen enclosure and moved Franklin out of the chicken pen: 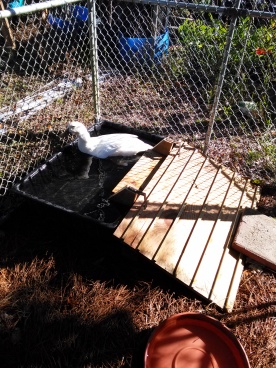 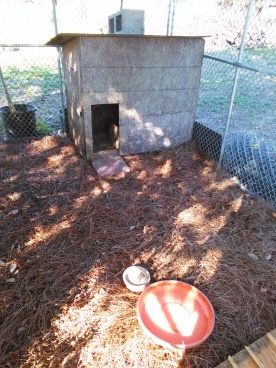 Because of her bad leg, he built a ramp into her pond that isn’t as steep she used to have. He also put some steps in on the inside of the pond so she can get out. He also took the stilts off of the house and put it right on the ground so she can get in and out easily.

So far, she’s been MUCH quieter. Paws crossed it stays that way because she is ridiculously loud!

Whew! That was a big post. Talk to you guys later!