I am REALLY slacking

I have been a bad blogger. I miss you guys. I shouldn’t stay away for so long.

It’s just that with Molly recuperating, Macy has been a pain in my tush. She’s acting the way she was before Molly got here. Screaming in my face about who knows what. I can’t even think when she’s howling and going on.

Molly wants nothing more than to play with us but Mom’s not allowing it. Not because she’s growly and grumbly but because she doesn’t want Molly to hurt her mouth. Well…that didn’t go so well.

The day after Molly’s surgery , Mom and Dad noticed that Molly’s breath was really bad. Mom assumed it was because she wasn’t drinking a lot and there was dried blood, etc. By Thursday, Molly had drank less than a 1/2 cup of water since she got home on Tuesday. Mom called the vet and told him that she wasn’t drinking and he said, “Feel her gums. Are the tacky or wet?” Mom told him they were very wet. He said Molly was getting plenty of fluids from the canned food and not to worry as long as her gums were moist.

Over the weekend, Molly’s breath got way worse. Mom took Molly to the vet first thing Monday morning. At first, he said everything looked great from what he could see, although he could smell the bad breath. He said as long as there wasn’t any drainage, we shouldn’t worry. Mom told him there had been pink drainage.

With that, Molly had to go under anesthesia AGAIN! Would you believe that she ripped out all 5 sutures?!?! She hasn’t even been doing anything except eating delicious canned food and sleeping in Mom and Dad’s bed! The vet said that the extraction site was packed with food (UGH!) so he cleaned it, packed it with antibiotics and put thicker sutures in. He told Mom that he does 4 – 5 gingival flaps per week, 25 a month, has been practicing in FL since 2000, and this is the first time he’s ever had one fail.

Leave it to Molly….

She has to go back for a checkup in 7 days and then a followup 7 days after that.

Oh, she also gets to eat canned food for another 2 weeks!!! I’m not even allowed to have a taste.

So that’s my life in a nutshell (a big nutshell).

And since pictures of Macy seem to please you all, for your viewing pleasure, I give you Macy acting Marmaduke-ish: 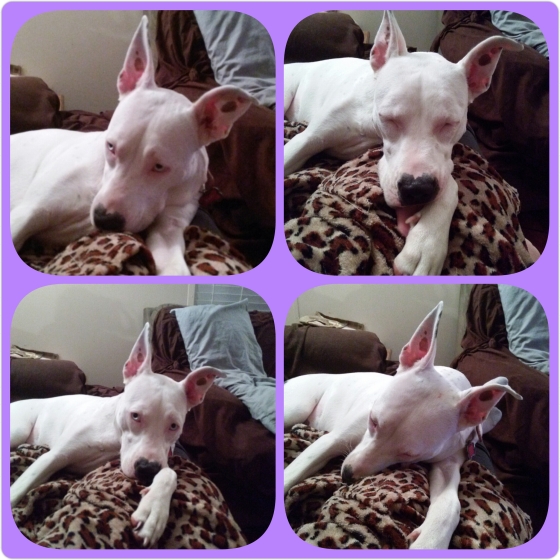